Seimei worked as onmyōji for emperors and the Heian government, advising on the spiritually correct way to deal with issues. He prayed for the well-being of emperors and the government as well as advising on various issues. He was also an astrologer and predicted astrological events. He enjoyed an extremely long life, free from any major illness, which contributed to the popular belief that he had mystical powers.

The Seimei Shrine, located in Kyoto, is a popular shrine dedicated to him. The Abeno train station and district, in Osaka, are sometimes said to be named after him, as it is one of the locations where legends place his birth.

Seimei’s life is well recorded, and there is little question about it. Immediately after his death, however, legends arose much like those surrounding Merlin. Many legends of Seimei were originally written in the Konjaku Monogatarishū, and by the Edo period there were many stories in circulation that focused on his heroic acts.

According to Anderson, [6] Abe no Seimei was a descendant of the poet Abe no Nakamaro and a disciple of Kamo no Tadayuki (賀茂忠行) and Kamo no Yasunori, 10th-century diviners of the Heian court. He became Kamo no Yasunori’s successor in astrology and divination, while Yasunori’s son took on the lesser responsibility of devising the calendar. [7] [8] Seimei’s duties included analyzing strange events, conducting exorcisms, warding against evil spirits, and performing various rites of geomancy. He was said to be especially skilled in divining the sex of fetuses and finding lost objects. [2] According to the Konjaku Monogatarishu, he correctly predicted the abdication of Emperor Kazan based on his observation of celestial phenomena.

Seimei’s reputation grew sufficiently that, from the late 10th century, the Onmyōryō, the government ministry of onmyōdō, was controlled by the Abe clan. The Kamo clan likewise became the hereditary keepers of the calendar. [9]

The mystical symbol of the equidistant five-pointed star, referred to in the West as a pentagram, is known in Japan as the Seiman or the Seal of Abe no Seimei. [10]

According to legend, Abe no Seimei was not entirely human. His father, Abe no Yasuna (安倍 保名), was human, but his mother, Kuzunoha, was a kitsune (a "fox spirit"). [11] At a very early age, no later than five, he was allegedly able to command weak oni to do his bidding. His mother entrusted Seimei to Kamo no Tadayuki so that he would live a proper human life and not become evil himself.

The Heian period, especially the time when Seimei lived, was a time of peace. Many of his legends revolve around a series of magical battles with a rival, Ashiya Doman (蘆屋道満), who often tried to embarrass Seimei so that he could usurp his position. One noted story involved Doman and the young Seimei in a divination duel to reveal the contents of a particular box. Doman had another person put fifteen mandarin oranges into the box and "divined" that there were fifteen oranges in it. Seimei saw through the ruse, metamorphosed the oranges into rats, and stated that fifteen rats were in the box. When the rats were revealed, Doman was shocked and defeated.

Seimei is involved in numerous other tales as well. He appears as a minor character in the Heike Monogatari and is said to be responsible for divining the location of the Shuten-dōji, a powerful oni purportedly slain by Minamoto no Yorimitsu. [12] He is sometimes said to be the onmyōji who discovered Tamamo-no-Mae’s true nature, although the time of the Tamamo-no-Mae story does not coincide with Seimei’s lifetime; other sources credit the act to a descendant, Abe no Yasuchika. [13] [14] [15] 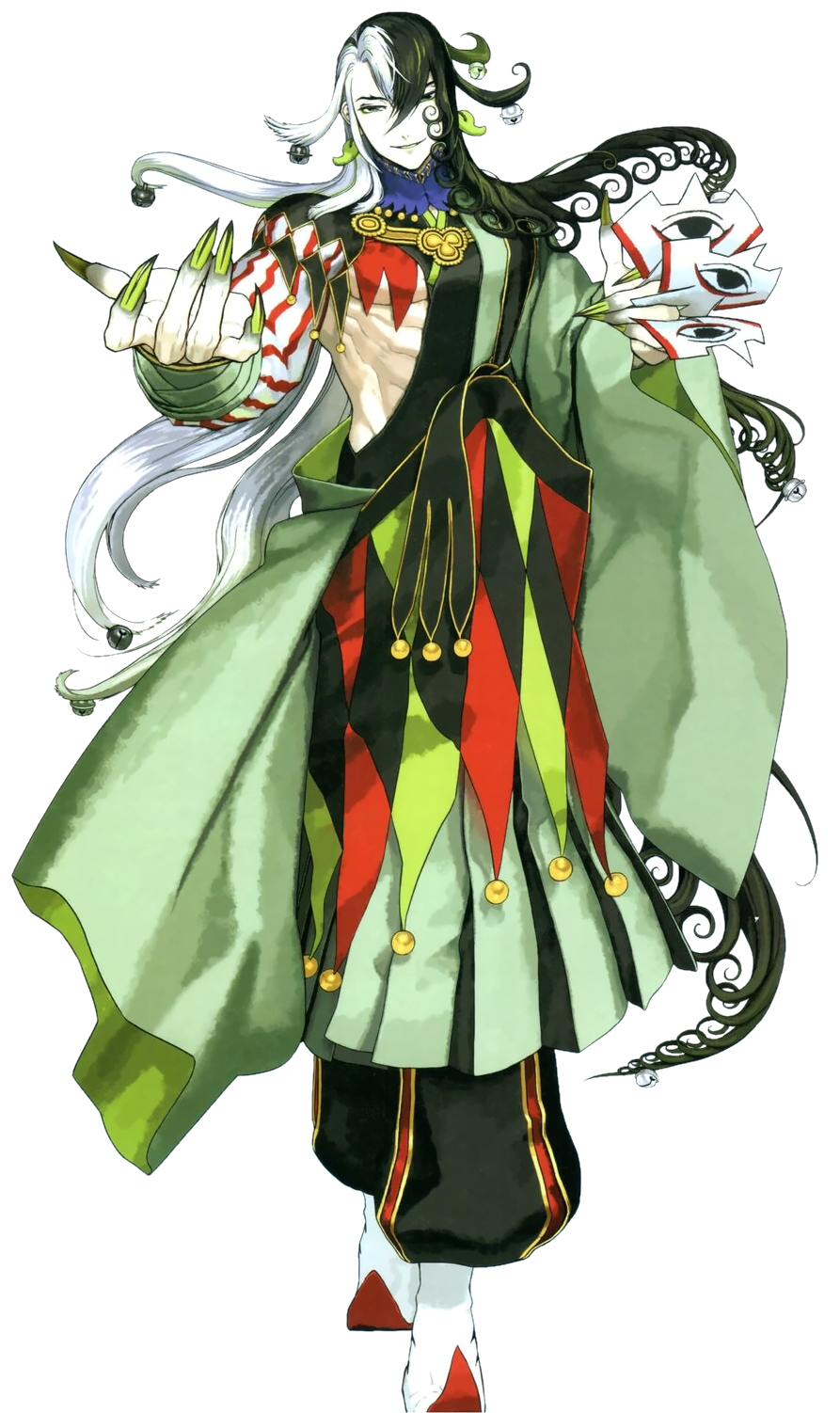 Alter Ego (アルターエゴ, Arutā Ego ? ) is an Alter Ego-class Servant working as one of the three Alter Ego apostles of the Alien God in the Lostbelts of Fate/Grand Order: Cosmos in the Lostbelt. They are working in tangent with the seven Crypters attempting to supplant the Greater History of Man with the Lostbelts.

Alter Ego’s True Name is Ashiya Douman (蘆屋 道満, Ashiya Dōman ? ). Douman is an Onmyouji in the Heian period and rival to Abe no Seimei.

He is described as a voracious, carnivorous beast whose voice is akin to a ghost of an evil king who devours gods, rips them apart, and makes their flesh his own. An ego guided by a greater existence, whose core brims with evil and malice. [1]

Shimousa Province: The Stage of Rivers of Blood and Mountains of Corpses Edit

At some point, he met an alternative version of Amakusa, and both agreed to execute a plan to exterminate humanity.

He appears in the story as the Caster-class Caster Limbo (キャスター・リンボ, Kyasutā Rinbo ? ), being one of those responsible for the events in Shimousa, using black arts to corrupt several servants and turn them into beings that spread destruction across Shimousa. His silhouette is seen for the first time when the Seven Heroic Spirit Swordmasters appear to welcome the last member. He is the one who personally carves the Curse of Annihilation and transforms him into the remaining swordmaster. [2] He is the one who reactivates a certain puppet, which he dispatches to accompany the Chaldea faction in order to lure them into a trap.

At the climax of the story, on the arrival of the Onri Edo, he is seen as responsible for the strange phenomenon of the of sudden day/night shift, as the one who summons the monsters that appear at night. He decides to appear in the castle gardens, where he presents himself as Abe-no-Seimei before the group, to their disbelief. When Musashi attacks him, he decides to reactivate a version of the Curse of Annihilation in Danzou, causing the puppet to attack Chaldea against her will, as well as to release the horde of monsters he had saved for that moment. Seeing that it didn’t work, Limbo decides to use the Curse of Annihilation on Musashi to transform her into a Heroic Spirit Swordmaster, but she is saved by the Chaldea Master. Surprised that his empowered sorcery was easily undone, he was injured by Musashi who took advantage of his confusion. Now angry to the point his face distorts, he decides to summon the Great Spirit of Limbo to defeat Chaldea, but to no avail. He is caught off guard by Fuuma who slashes him, presumably killing him. [3]

Later, his silhouette is seen on the upper floors of Edo castle. He survived and had hidden his presence to attack Musashi by surprise, but is stabbed by Empireo at the last moment, who states how disgusted he is with Limbo’s existence in his sight before apparently disposing of him for good. [4]

At the end of these events, a surprisingly alive Limbo appears annoyed about the outcome of the entire setting. After calming himself, he claims that, even if he failed to invade Chaldea, he has finally succeeded in finding the Lost History (Missing Belt). He then mentions that the "Satan" he was following was just a false name, a ridiculous joke that he got onboard with a bit too far, before sincerely apologizing to ■■■■■■■■■. [1]

It was stated by Koyanskaya that Douman had found something interesting in the Indian Lostbelt, so it’s unlikely he would budge for a while. [5]

At some moment, he appeared in the Indian Lostbelt and convinced God Arjuna to accelerate the Maha Yuga in order to attain the flawless world the Lostbelt King seeks. He also helped him in summoning servants who, upon receiving divine authorities, they became Arjuna’s Divine Generals. [6]

He is seen alongside Koyanskaya, amused at the way Black Final God remakes the world, stating that no matter how many times he experiences it, he always finds it fascinating. In response to Koyanskaya’s comment about how sluggish it was because Chaldea could escape from it, he warns her about trying to provoke God’s wrath: even they wouldn’t be able to escape if Arjuna deemed as unnecessary in the next cycle. He finishes expressing his wish of seeing the perfection that God is slowy reaching through the Yugas. [6] Later, when the Priestess appeared next to him and he was somehow told about Koyanskaya’s actions, Douman advises Arjuna about taking actions against her before it could develop into a danger to his world. [7]

For some reason, he refers to the Fantasy Tree as the Tree of the Empty Rhetoric. It is later revealed the body he used in the Lostbelt wasn’t his true one but his Saint Graph engraved on a shikigami. [8]

He is shown using a kind of sorcery called Curse of Annihilation, with which he can turn servants, humans or puppets into genocidal beings who cannot avoid bringing death and destruction to all human life in sight. [2] Those under the effects of the curse become undead beings that cannot be shot down by convectional methods, even with attacks from servants. Only a weapon that can cut through karma has be shown to be effective against them. [9]

He has the ability to change day and night at will, as well as to summon a Crimson Moon, which can randomly transform humans into monsters. [3] He claims that both the Curse of Annihilation and this ability were granted by the mysterious being whom he jokingly calls "Satan."

He can make clones of himself engraving his Saint Graph in shikigamis, control them at will and disperse them whenever he pleases. [8]

Shouichi Furumi is the character designer for Ashiya Douman.